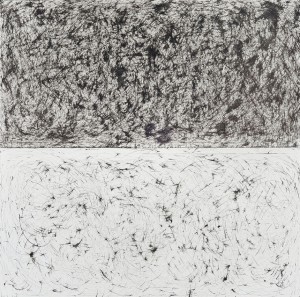 A Matter of Lines

Rehana Mangi was among the first batch of NCA graduates from the department of miniature painting who transcended the realm of traditional miniatures and expanded the potential materiality of the discipline for academia and studio practice. Since then, she has been surprising the viewers and art critics with her distinctive and refreshing approach to art making. However, this particular body of work, exhibited at Canvas Gallery, did not meet the expectations that the artist has established in the past through her sensitive, lyrical vernacular. Setting a precedent for others to follow at a very young age, this time around, Mangi adopts the line as her core object and creates something that has been exhausted in its content and as well as form. Many artists have traversed the line before several times and played, manipulated and rediscovered it in numerous ways. Unfortunately, in Mangi’s, there was no novelty.
Although one could catch a direct connection to Mangi’s previous art portfolio, this body of work was more liberating in its medium and far more therapeutic; as if her mark making was going through a transition, a catharsis or a kind of breaking free from the precincts of tight forms and direct, representational imagery done previously. The large-scale linear marks in Auto Script series-I, rendered with water proof/ fade proof pointer on wasli paper, insinuate a kind of genesis, or an obscure manifestation of a living body, a presence of human skin or male chest hair dissipating into its spongy off-white surfaces. The eye comfortably journeys through the work’s sensitive and subtle impressions. I see you II rendered in acrylic on wasli paper eludes to a cagey organic animate form partially revealing its identity through its seductive black and white hues. The lack of representational imagery in the paintings, however, lends an open-ended interpretation to the artwork and presents an abstract narrative at multiple levels.
Mangi treats the pointer and black acrylics as her central subject. Extensively working with hair and beautifully exploring its potential in the past, Mangi now takes the linearity, crispness and aesthetics of hair forward. She builds a constellation of lines; some vivacious and spunky while others remain relatively passive. Her largest drawing with a pointer on canson sheet (59.5 x 393.7 inches) embraces the largest wall of the gallery but making something larger (or longer) than life does not inevitably mean that one would do justice to its content too. Many are awestruck by its vast scale but the invariable scribbling that embellishes its white flat surface seems rather monotonous and formulaic; the entire piece appears to be a 33-feet long scrawled pattern for a backdrop.

Strolling through the gallery, one suddenly encounters Out of Focus, a ‘Franze Kline’ looking painting, and it makes one wonder where that comes from, amongst a pool of soft, porous and dainty surfaces that epitomize Mangi’s work. Some of the other works in the Auto Script series are tamed in their linear style and application, seeming like rote and dreary alterations of the same kind of lines.
Tender hues of blacks and whites seductively adhere and intertwine with each other, in Black and White, while simultaneously transforming into corporal landscapes and celestial bodies. Employing a range of mark applications (flat, curvy, spiral, knotted, entangled, voluptuous, linear, jittery, smooth and sculptural) in some of the works that stand out exquisitely in the show, the artist explores the materiality of the medium extensively. The energy in each stroke is unceasing. There is a gripping interplay of space within its frisky and fidgety forms. The lines are gestural and loose; some tactile while others remain surreptitious and inaccessible.
Some of Mangi’s marks have a distinct personality to them. They embody motion and action with poise. Shades of black assimilate into sultry white surfaces fortifying a diverse spectrum of psychological and visual moods and creating an intimate distance with its viewer. The work conquers visual space in all dimensions, gracefully taping onto the intuitive and subliminal spaces of consciousness.
Rabeya Jalil is a visual artist and art educator who is currently affiliated with the Fine Art Department aat the Indus Valley School of Art and Architecture, Karachi, Pakistan.