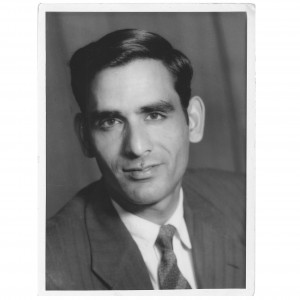 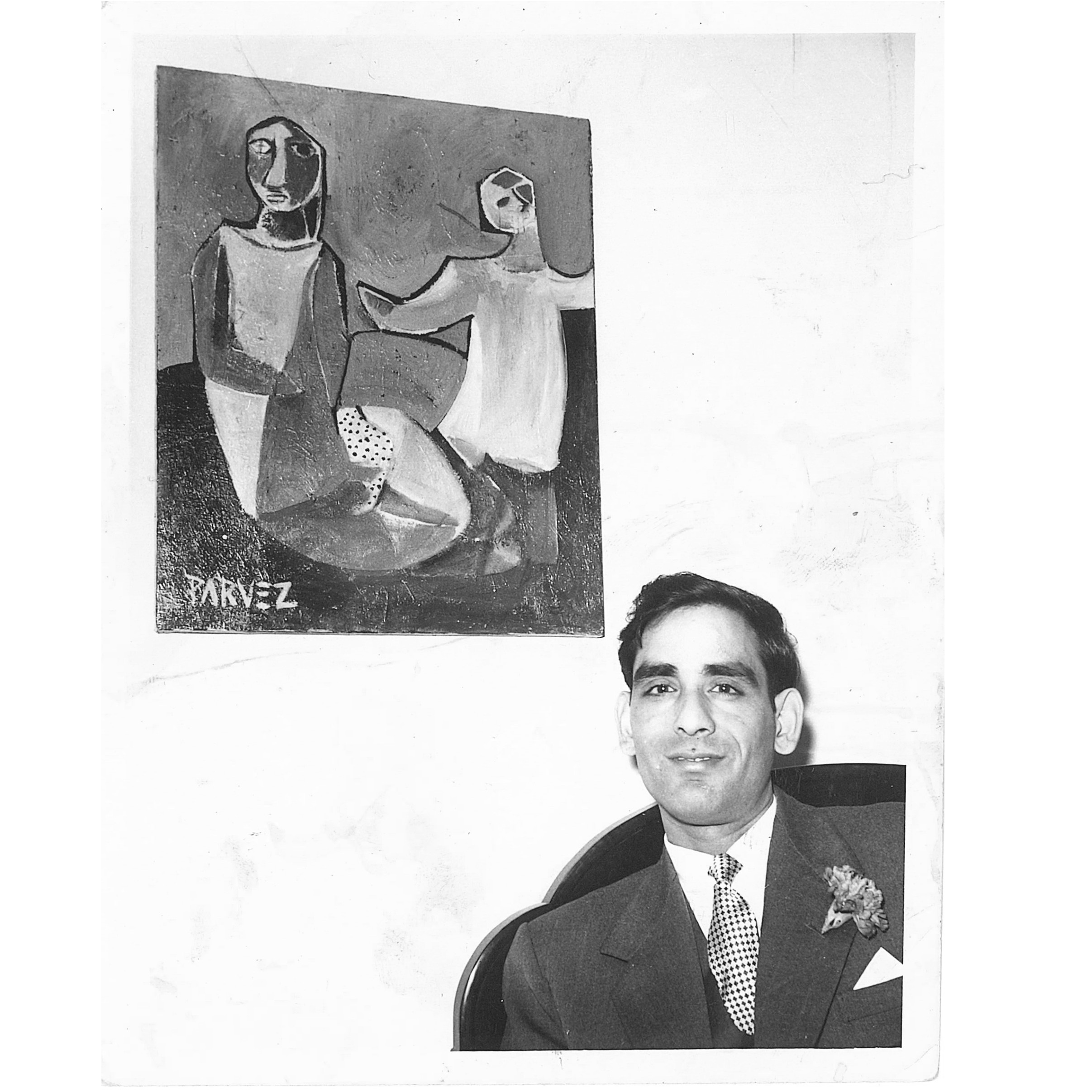 A Glimpse at the Enigmatic life of Ahmed Parvez

When invited to write about my father, Ahmed Parvez, I had only two sources I could rely on: early childhood memories of my life with him in 1960’s London and what survives of him in my genes.

As I approach sixty, I am dismayed at the lack of positive words written about him and in this retrospective I too, struggle to find my own nuggets of virtue.

He was without doubt a very complex carbohydrate!

Misunderstood, multi-faceted, often delusional, perplexing, as mad as a Hatter and utterly lost. He was a tragic drama waiting to unfold daily, often bringing chaos, pain and frustration to everyday life.

On the other hand, in contrast, on a good day he was an extremely loving, lyrical, passionate, poetic, exceptionally creative, vibrant, charismatic man and an attentive, tactile Pappa.

In my mother, Rani (his first wife and mother to four of his six children) he found a loving soulmate who nurtured and nursed him, before he, so tragically, began his self-destruction and brought about his own downward spiral.

In the late 1950’s we rented a beautiful large apartment in the Royal Borough of Kensington, London. He would enjoy the stroll to Green Park to view the artists selling their work from the railings. He would watch street artists chalking the pavements and would fraternise with comedians, actors and artists in the local pubs by the BBC TV Studios. My father once brought home a young Egyptian actor for curry and not too long after this young man found great fame; a man by the name of Omar Sharif!

His acquaintances were as colourful and flamboyant as he was. He would feed on life experience and then express this raw, organic energy through paint. He was, however, his own worst critic. Once, disappointed with one of his own large canvas works he set about destroying it and draping the wooden stretcher-frame around his shoulders. My mother found him walking up the street as if carrying a cross to his own crucifixion and noted that this may have been his penance.

He painted from home, exhibited and gained credibility with art dealers and critics. Victor Musgrave stated “without question, the outstanding artist from Pakistan who has made a very strong impact upon the English art world.”

A review from The Times suggested his work ‘highly charged with the restless energy of Modern Art; bursting into exciting cascades of colour’.

But following the births of four children and his increasing dependency on alcohol, arrears meant he could barely support his family.

In the early 1960’s we moved to a damp and dismal basement flat in a rougher neighbourhood in London. The six of us shared one bedroom as the second bedroom was assigned to his studio. By then, he had sold off most of the family’s possessions, including furniture, the record player and even the pet budgie. He walked out of the door with Pretty Bella, the budgie, in its cage and when confronted by us, his distraught children, he promised to swap the bird for four guinea pigs justifying four furry cute pets to be more lovable than one feathered one. I was four and deeply distressed. Upon consuming enough alcohol my father returned frantically from the local pub (without the promised guinea pigs) to paint.

My mother’s kitchen utensils would disappear to the studio: wooden spoons, sieves and plates for mixing. Our family’s life revolved around his turmoil. In his free time, my father would take us to see the huge steam trains emerging from Clapham Junction Station. In family photos from this time he seemed smiling and carefree which masked his darkness. Responsibility was not his strong suit and he’d often leave my brother and I to walk to school alone. Having been abandoned by his own mother, it seemed that he himself needed parenting.

After amassing a large enough volume of work, he’d clear the furniture from the living room and cover every square inch of wall space with his paintings, creating an impromptu gallery. He’d pace the floor, critically eyeing his efforts and eventually wearing a threadbare path in the carpet. We’d find this mannerism amusing, as we waddled behind him like baby ducklings in formation.

On party nights we’d sit huddled in the one remaining chair watching the guests arrive before we were ushered to bed. The emerging work was greatly received and the proceeds were used to repay debts and rent arrears. He would then buy paints and drinks, although I never quite understood which took priority but had a mere understanding that one fuelled the other.

I had fond memories of painting alongside him in the small studio bedroom with pink flowery wallpaper as cold light downcast from the lower ground floor window on the North side of Wands worth Common. I have always cherished the photograph that depicts this. Some fifty years after the photograph was taken, I read in Marjorie Husain’s book ‘Ahmed Parvez’ where my father is quoted saying,

“One day Noorie and I were painting together. She was admiring my efforts and I admired her efforts at flowers”.

’Don’t be silly daddy! These are not flowers but the Suns” I chirped. (He continues)

“My daughter’s flowery suns were so loving, so beautiful and so inspiring that I forgot all that I had learned in the past. It was like starting all over again.”

(Further proclaiming to have painted over seven hundred flower paintings in just one year).

“Let me begin from a higher place where the untiring sky moves from frame to frame and spills the glow of flowery suns. Noorie, my sweet little girl had triggered off the poet in me…I was being lyrical…”

He went on to describe cloudy London being like an opaque window and the world seemed dull and downcast. It is noticeable that most of the paintings from the London years were often in muted palettes of Grey, Blue and much duller than the vibrant masterpieces he would later paint in Pakistan in the 1970’s. His bedroom-studio offered little light.

In black-moods he would question what he was doing in gloomy, smog-infested London. He would paint small watercolours on paper when he couldn’t afford oils but one brightly coloured large canvas from this era (seen above my mantelpiece) was an explosion of vibrant colour. I woke up to it for many years until one day I saw it as a possible self-portrait as I saw a violently exploding head, a blood red mouth and projectile eyes and wondered if this is how he had felt inside?

By 1964 the marital rows ensued as his disruptive lifestyle of drinking, gambling, debt and sexual infidelity destroyed my parents’ marriage. He’d taken a day job with the Pakistani Embassy in London in an attempt to make ends meet, sadly to no avail. Eventually, one day he entered the offices of the Pakistan International Airlines and swapped a painting for a one-way ticket to Pakistan and left us destitute just days before Christmas that same year.

A few years later he returned to London and I accidentally bumped into him whilst playing with a friend after school. He was their family’s lodger and we were unaware he was back in the UK. He had apparently handed back the keys to a rental art studio, stating that he could not paint without his children around. He wanted my mother to come back with him to Pakistan but she refused. A bitter divorce ensued and custody was awarded to my mother, a former teacher, who continued to raise us to encourage and appreciate art amid the plethora of galleries London had to offer.

My teenage cousin wrote to me in the 1970’s recalling how she’d have tea with my father and watch him paint. On telling her about writing this retrospective she said whatever happened to her then he would imagine it to be me, not her. He would pamper my cousin as a way of consoling his guilt. He would tell her how much he loved me, citing me his ‘Princess’. During my teen years, he wrote gushing, poetic letters with attempts to reconcile with us. Unfortunately, his premature demise meant that this reconciliation would never happen.

It is hard to discuss his art without dissecting his personality and trying to understand his inner turmoil but this unrest, beauty and confusion is brushed across canvases for eternity.

Later in my life; I grew to understand more. Both he and my mother were abandoned by their mothers. It’s likely that many of his troubles stemmed from this but it is with much acknowledgment that, had he been more ‘normal’ he would not have had the ability to create such complex works.

He remains in death, as in Life; an Enigma.