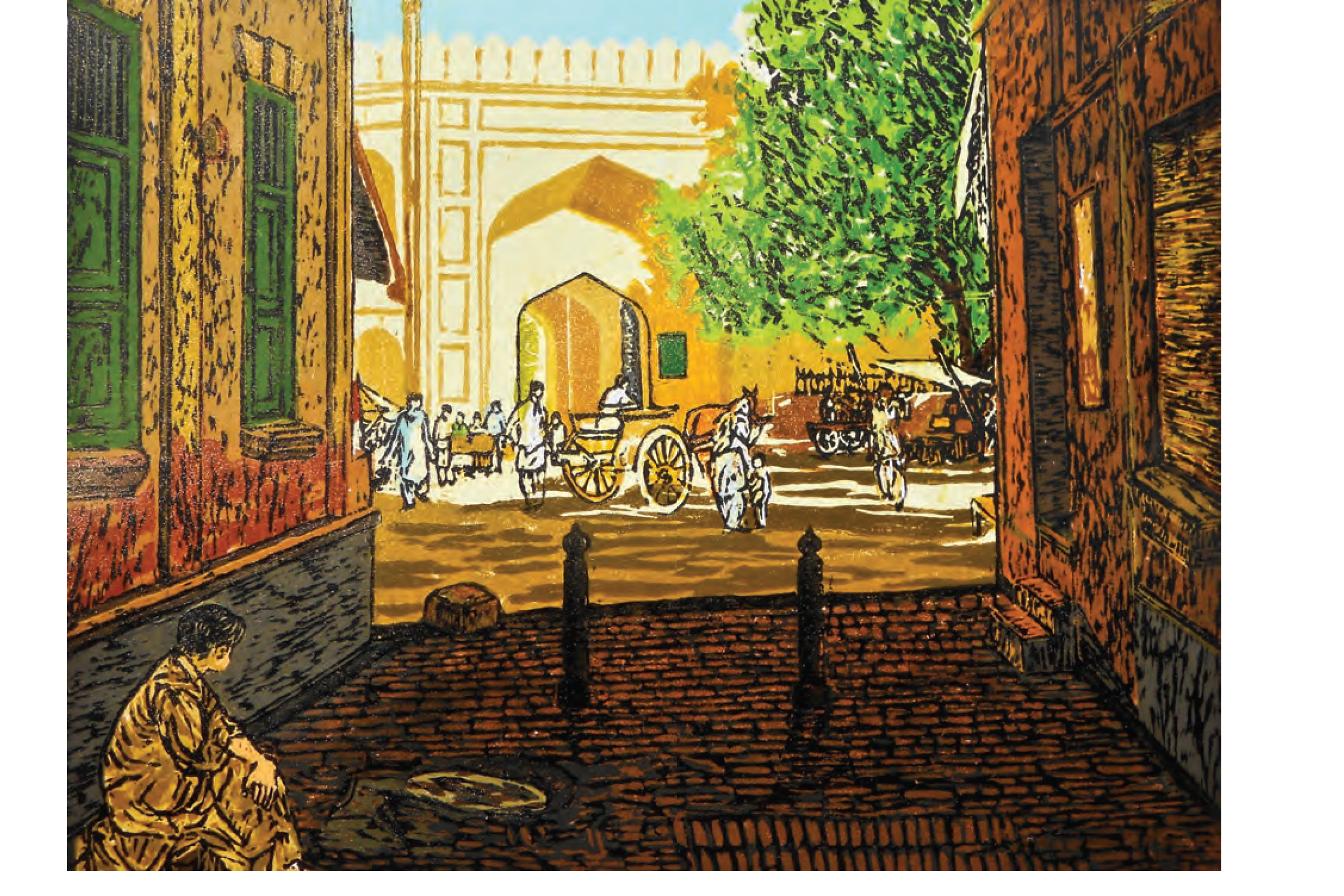 Woodcut printing is the earliest relief-printing method in the history, which spread in the 8th century in the east and 15th century in the west. Woodcut printing would look boring to many as it was produced in only one color, required a lot of hard work, efforts and patience which is why it did not attract artists in the early times to study and learn woodcut. But gradually it gained popularity because of the artists like Edvard Munch who introduced softwood into his designs, Paul Gauguin who brought in new techniques of using hues and different textures in his work and a list of the artists from late 15th century to the 19th century who introduced different styles to keep the medium alive.

After the change and development in the aesthetics, the woodcut printmaking revived its importance. When we talk about woodcut artists in Pakistan, the only name that comes in our minds is a very renowned and senior artist of Pakistan, Mehboob Ali.

A journey of passion, hard work and determination of Ali’s life has brought more than 25 solo shows. In these years of success, Ali only worked as an artist but he explored the medium and brought a revolution by introducing nearly hundred colors in woodcut prints.

Ali is a graduate of National College of Arts and based in Lahore. He is the only artist in Pakistan who has brought the name of the country in the list of those countries where we find woodcut print making artists.

Woodcut printing is not an easy task as the process (cutting, chiseling and gouging) needs a lot of effort, labor and patience to let the hard work and process speak. That is why many artists do not choose woodcut print making for their career. Ali is a challenging ad determinant artist who, even after the hardships of life and financial challenges, has devoted his whole life and career to this medium.

In his recent exhibition “5 decades of excellence” held at VM art gallery in April, he exhibited woodcut prints in which he used around hundred colors on the wooden blocks. He printed the famous places of Lahore without the use of any machine that was an astonishing fact about his work.

Ali has just not been working as an artist but he had also been playing an important role as a patriot by recording the heritage of the country, specially the famous city of Pakistan, Lahore. In his work, displayed at the gallery, he spoke about his concerns regarding the rich culture heritage of old Lahore. His work was a fusion of history and modernity that created a wonderful imaginary ambience.

Ali captured the streets, buildings, architecture, lights and lovely views of Lahore, which could be connected to his previous work that mesmerized the visitors and art enthusiasts at the exhibition.

Besides the modern developments in Lahore, the destruction of culture heritage, architecture and historical sites is the other side of the story .

He played around the shadows and lights in the woodcut prints he makes which, near to him, are an important element in his work. The use of lights, shadows and colors and the way he beautifully managed the hues and textures in his work gave a delightful effect and was soothing to the eyes of the viewers.

“I never try to eliminate shadows from my work; I make shadows as a part of my work” Ali quoted in one of his statements.

The architecture of old Lahore has been an inspiration for Ali and the depth in his prints were nostalgic because he just not only made prints but he spoke about his childhood and the memories he has of the walled city that is also the mainstay of his work.

To teach woodcut to the next generation and upcoming artists, Ali has conducted various workshops to let the new generation know about this art form and learn the skill of making prints on wooden blocks.

Ali has devoted the last 5 decades of his life in making these fabulous portraits, landscapes, buildings on wooden blocks that hold an archival importance as well. He is a pride of Pakistan who has not only accomplished his goal of becoming a woodcut print maker but made Pakistan proud on different international platforms by presenting his work as the only woodcut print maker from Pakistan and struggling to pass on this genre to the next generation.

One Response to 5 decades of excellence