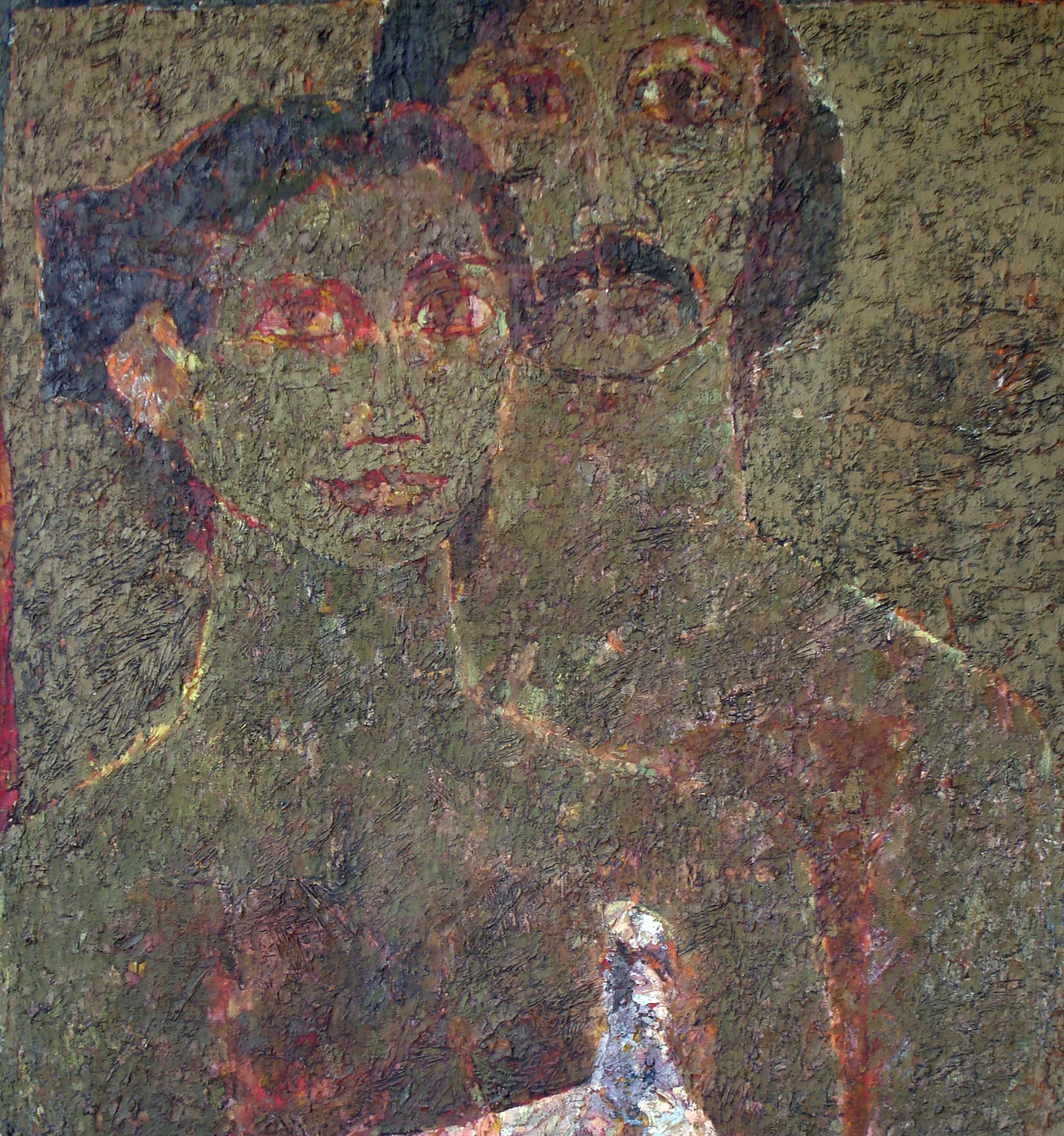 The new millennium is a privileged vantage point from which to consider the major achievements of the last century. The idea of South East A

Sheherezade Alam
The Ghosts of Past and Future: Pakistan in Venice
Culture, Ecology and the City | Can the Culture of Arts Influence Citizen Participation to Create an Inclusive Society?

The new millennium is a privileged vantage point from which to consider the major achievements of the last century. The idea of South East Asia as a remote but intriguing locus of participation in the profound artistic redraft carried out by twentieth-century Modernism affords a new dimension to a self-satisfied and canonical art history. That South East Asia in general, and Pakistan in particular, are a source of new ideas about the nature and function of modern art should be a compelling enough idea to put to rest a host of reductive stereotypes that even today characterise accounts of the art of the region. Until stale adjectives, such as ‘peripheral,’ ‘derivative,’ ‘exotic,’ and ‘outsider’ are forgotten; our objective should be to acknowledge the plural stages of developments in art (in the region) alongside the multiethnic diversity of this geographic and cultural expanse.

The idea of a ‘Third World,’ ‘developing,’ ‘terrorist,’ ‘Islamist,’ ‘rogue state’ not only suggests a challenging site of expression for Pakistani art, it also foreshadows, in spite of marginalization, the counter-place from which a critical alternative to the avatars of European culture is elaborated. This supporting role assumes heightened urgency when confronted with the destabilizing force of Modernism which has been at the forefront of the cultural transformation brought about by the ascendance of capitalism and its inherited project of consumerism and commodification.

In a series of groundbreaking movements in the West that included Cubism, Futurism, Dadaism, Constructivism, and Surrealism, artists from all over Europe sought to give visual and literary expression to a progressive ethos – one predicated on the trenchant questioning of tradition and the status quo in all its forms, whether political, economic or artistic. But the thread that held all of these disparate groups together was not the frivolous and fashionable trends. Instead, it was the fundamental belief that art held the key to an ideal form of socio-political organisation that was based on the unrestricted exaltation of both individual and collective creativity.

The early practitioners of art appear to have been guided by this desire to cast away staid conventions and forge uncharted modes of expression to fit their vision of an art-driven utopia. In returning to their places of origin, they implemented the local versions of the avant-garde, modelled, of course, after the Western prototype. Having been trained and participated in the most significant cutting-edge movements in Europe, these young artists felt compelled to make real the promise of a new art for a society in which modernization was still in its incipient stages. Confronted with precarious infrastructures for art and culture, as well as with the presence of native traditions and vernacular expressions, they adapted avant-garde procedures, transforming them to suit the realities of their local milieu. In their hands, the original premises that animated the European styles underwent a series of vital inversions, the most significant of which implied shedding the weight of history in favour of a symbolic imaginary of a modern society and identity, articulated by the National College of Arts and concomitantly by the Department of Fine Arts at the University of the Punjab. The impetus with which these manifestations took root in Pakistan suggests that the artists involved departed from the legacy of their colonial predecessors to formulate an aesthetic sensibility that was a ‘genuine’ manifestation of autonomy within the expanding Eurocentric phenomenon.

The diversity in painting in Pakistan since its very inception offers provocative oppositions that suggest inexhaustible comparisons between specific artists, movements, and/or works. This bounteous interplay reveals a host of links and unsuspected nexus between modernist manifestations, which transcend individual histories.

The foundation movements of the ‘40s and ‘50s speak largely for the tension between the vernacular/indigenous and the universal. These efforts graduate into more sophisticated manifestations that result in an open-ended series of ruptures that individual artists and artists’ groups enacted to announce their complete autonomy from academic canons. If the first two decades after 1947 represent the consolidation of ideals in the heat of nationalist projects, the second period shows the greater autonomy and originality achieved as a result of the economic prosperity. The vast diversity and heterogeneity of the region, however, preclude any uniform artistic development in painting. The type of manifestations that appeared thrived, for the most part, in open urban centres, such as Lahore and Karachi, receptive to the kind of international culture promoted by the historic avant-garde movements.

The first outstanding feature of painting in Pakistan is its pivotal relationship to history embodied in references to both the distant and the immediate past. One of the defining traits of the early decades was Abdur Rehman Chughtai’s attempt to seek a drastic break from the bourgeois Bengal School of Painting founded by the Tagores in West Bengal. While Ustad Allah Bux’s refusal to bypass the legacy of the English past, as seen in his landscape, implicitly carried the inversion of the poles of tradition and modernity: it incorporated a paradoxical notion of tradition as the starting point for our continent’s new approach to art. In this perspective, tradition was the accumulation of experiences coming from European artistic traditions which functioned as an inventory of New World art. This hybrid notion of tradition facilitated the new art of post-Partition Pakistan while synthesizing the best answer our artists could find. It was in the constant straddling of the old and the new, of assimilation or contamination, that the genuine contribution in painting achieved a concrete form. This concrete form, steeped in tradition, continued to flourish in its many new incarnations as the School of Landscape Painting perpetuating the colonial ideal of celebrating feudalism and neo-Orientalism.

The blitzkrieg appearance of Amrita Shergil on the Lahore art scene heralded the influence of Western post-impressionism on the eastern villagescape. The emergence of the female figure, whether clothed or nude, however, remained for the larger part a male domain. The male artist looked upon the female figure either as his artistic muse conforming to the ideals of Greek and Roman classical beauty and balance, or simply as an object of desire adding to the discreet charm of the bourgeoisie.

Another important fundamental characteristic of Pakistani painting is its reluctant perspective vis-à-vis the stereotype of the new. A modernist drive that could become a productive agent of social change has been a welcome phenomenon. However, the artists’ forays into the redefinition of art implemented by the avant-garde did not end at the level of subject matter – it also encompassed the application of new materials, techniques and artistic concepts.

The need to question through art the opprobrium perpetrated in all the spheres of life unified ideologically and formally a particular group of artists that emerged as a reaction against the military regime and its modalities from the late ‘70s through the late ‘80s. It must be stressed that in order to objectify their rebuttal, the language this group of artists concocted differed significantly from the wasted modalities of social realism – a tendency that stereotyped a considerable spectrum of the artistic production of our continent. Beyond this platitude, the kernel of these proposals was not to didactically illustrate social misery but rather to re-create its perverse essence through a series of evasive strategies. In most of them, either the emblematic repertoire of allegory or the double-code of parody served to ground the sacrilegious proposal.

Such an irreverent attitude had a powerful antecedent in the antagonistic humanism of Iqbal Hussain. Both allegory and caricature served artists like Salima Hashmi, Zahoor ul Akhlaque, Naazish Ataullah, Afshar Malik, Anwar Saeed, Quddus Mirza and A R Nagori to denounce the complicity of civil, military, and religious powers. Here, the stress was placed on the shameless extermination of people and civilisations. The emblematic corrosiveness rubbed some salt in the wounds of societies plagued by colonialism, repression, corruption, and extreme violence. Grotesque bestialisations of abusive power conveyed the moral and physical plight of battered women, turning some of the female artists of the time into forerunners of feminist art in the continent.

A second nucleus of painting brings together artists for whom the iconoclastic practice and critical thought ruled the rooster. The parodic recourse framed the formal and ideological concerns of their proposals. Parody – understood as a strategy of quoting directly from established narratives – allowed these artists a less conventional approach to reality. Through appropriation, exaggeration, and biting irony, parody alters sociocultural practices and artistic conventions at their very essence. Their controversial iconography still resonates in our present. In the profane hands of these creators, parody confronted the tragedy of a society under dictatorial rule and censorship without losing its grotesque proneness to black humour. Their deep-seated questioning of the function of art in a society characterized by repression, censorship and de-facto authoritarianism can be seen in Mian Ijaz-ul-Hassan’s painting from the ‘70s through the ‘80s.

But there is no better trend to solidly illustrate the capacity of inversion than the one grounded in gestural abstraction and constructivism. The aim of annulling the world of representation by structuring the artwork as a concrete, autonomous entity in which line, colour, and plane, disengaged from the exterior world, are nothing but themselves, was shared from quite different perspectives by various artists, including Raheel Akbar Javed and Lubna Agha, and their precursor, Zubeida Agha.

Finally, all of these conceptual manifestations symbolically came to a climax with the birth of artificial intelligence, the computer technology, and the social media. Being in the fragile margin between art and political action, bizarre counterpoints to all these transgressions offer a caustic metaphor and critique in the new millennium where parallel trends in making art and divergent voices in painting continue to thrive – undauntedly.