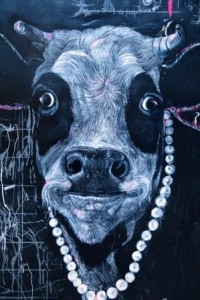 With 153 pieces from 20 universities at the 14th Emerging Talent show at VM gallery this year, it was easy for many of the works to get lost. The boldest works had a quiet subtlety that allowed them to stand out.

Noreen Ali from IVS (Karachi) combined humour with mixed media. In Traffic Jam, a  carved sketch of a cow is placed between grids and puns spelled out in collage; “In conversation with an ass”, “curator TAR gallery”, and “ART TAR” are some of the artsy jokes on the canvas.

Tamkeen Khoher from NCA (Rawalpindi) displayed framed digital prints on paper, two uncomfortable looking women trapped within the motif of what could be a rug or illustrated manuscript. One of the women was biting a thin cord that was strangling her face, the others face was covered both with dirt, and a handkerchief to wipe it off. They didn’t seem to be asking for pity, they were just uncomfortable and irritated with the quandaries they that had found themselves in.

Certain works presented concerns about the traditional concepts regarding paint and canvas itself. Maliha Saleem’s two pieces are blue expanses that explore colour, gradation and line whereas Rabia Ali’s painting is very a physical rendition of an artists freedom to apply generous strokes- enamel on canvas, thickly lathered, bright, brave and delightful. Pashmina from CEAD, Jamshoros ‘Uthran’ played with negative space- the paint being as important as the space it occupies and vice versa.

What appear to be noodles of terracotta make up Mujtaba Ali’s ‘Meditation’ sculptures. Ali’s pieces look like nests, each a different arrangement of brittle ceramic strings. Fragility was also a component of Tayaba Asif’s work, a headless doll in an glass box wears a twisty frock of dried leaves. Farhan Surani’s untitled piece showcased two long slim rolls of paper entirely covered with a very clean drawing in marker of an unsupported and never ending ladder. Didn’t seem like a safe climb. In Maria Rehan’s work, a fractured rural scenery is painted onto a large broken pebble. A pathetic attempt of metal rods trying hold it together makes the work both tragic and impactful. In contrast, Hafsa Mehfoz’s untitled pieces feature colorful polythene bags stretched with a cheerful conviction and rhythm across a frame.

Several artists depicted the domestic relationships in a haunting manner. Saleena Shahid’s textured acrylic works depicted young girls with in dark surroundings. They felt hollow and entranced. Noor ul Huda’s ‘Fathers day’ paintings created domestic interiors with frantic and fibrous strokes. Family members though occupying space the same room seem to exist in their own worlds. Maryam Arsalan paints a woman holding a child, the child has incomplete facial features, fisted palms and a ghost of herself appears behind her. The bright scenery in the background makes the whole painting strange, troubling yet wonderful.

Everyday objects incorporated their way into Sabahat Aqueem and Ana Ifthikhar’s works. In ‘Tribute to the Pakistani Army’, Ana Iftikhar shows the military in the everyday – with ordinary striped fabrics in camouflage painted frames. Sabahat Aqueem embeds memories into the every day- a cane, and photographs are cast into soap. The works have a hopeless and vulnerable quality.  Some of the few photographs in the entire show were found within her small soap pieces where they were barely decipherable. Photographs also made their way into the work of Veera Rustomji, soft nostalgic paintings re imaging family photographs and lost histories.

A show of this size and scale is impossible to summarize or generalize. What was evident was a quest to explore both medium and material. At rare times there is a moment of humor. But most latent is a haunting sense of loneliness and that these young artists seem to concern themselves with.

Sophia Balagamwala is an artist and curator based in Karachi.