It is interesting to note that the great Mughals never got their sculptures made and have them placed in the city squares. What was stopping them from doing so when it was an established practice and tradition in cultures that they were in contact with? Was it iconoclasm, or an unsaid check from a society they ruled? Or was it out of respect for people belonging to a certain faith in the Mughal Empire that used the very art form for the sacred? This fact brings to our attention the often problematic relationship between place and discourse, its nature ranging widely from public to the political and from the sacred to the aesthetic.

It might be beneficial at this point to first look at the function of art in public space in order to build an analysis which could serve as basis for understanding. A fleeting glance from the historical perspective helps one classify the function under discussion into broader categories of aesthetic, commemorative, ideological, cultural and lately, the individual artistic expression.

The city of Lahore is more of an intriguing city than it is a pleasing one, or it could be both, depending upon your perspective of things. It is like a palimpsest with layers upon layers of time, space and events. Lahore presents a curious reader with examples of art in public space that cover the entire range of functions discussed above. Lahore is as much a traditional city as it is a modern city and the Walled City of Lahore serves as a good case study if one is researching the urban sensibilities of pre-modern Lahore that were rooted in tradition. These were based on the idea of a continuum in which art, urban space, culture and faith were inseparable. These sensibilities were centred on the understanding and the expression of the divine. 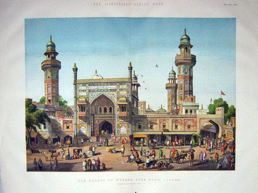 Let us for example look at the early 17th century Wazir Khan Mosque and Square inside the Delhi Gate. The design of the entire complex is coming from a tradition that is inspired from Islamic Period Central Asia. Its plan is based on sacred geometry which is a reflection of the cosmic order on earth. Apparently there is no public sculpture or art in the square, but if one is aware of the tradition that it belongs to, the façade of the mosque is serving the very purpose. It forms the optical centre of the square; therefore, any other art form in this space would have been a distraction. The ornate façade of the mosque is the aesthetic object and it carries the message of the divine in the form of architectural calligraphy of verses from the Holy Qur’an adorning the main entrance. We learn from archival references that the public discourse in the square revolved around this idea because the square was an extension of the inner courts of the mosque and its sanctity was respected.

The tradition of commemorative public sculpture came to Lahore with the British Raj. They brought with them an entirely different world view that was based upon European Enlightenment mixed with Colonial objectives of the time. It came from an understanding of the universe and existence that was based on empiricism and European ideals of progress and development; hence themes celebrating and commemorating human achievements in the fields of statecraft, politics, governance, scholarship and philanthropy took centre stage in public space and replaced the traditional ideals of divinity and aesthetics.

This shift from tradition to modernity resulted in a change in the ethos of Indian society of the time. As a result, in the beginning of the 20th century, we witness an urban environment in the newly developed British parts of Lahore that was inspired by European Baroque and Neo Classical principles of design. Neela Gumbad or the then King Edward’s Square is an example of the former and Charing Cross of the latter. In both the cases the spatial centre is also the optical centre of the urban space. Hence, there was a need to have some object or feature of iconic nature that was very often commemorative in character to adorn the centre. There was a bronze statue of King Edward VII in the Neela Gumbad Square and a bronze seated figure of Queen Victoria under a marble pavilion in the Charing Cross.

The British Period Lahore was planned as a city for the automobile, with wide roads and footpaths; therefore, there was a lot that was supposed to be experienced along the way, either driving in a slow moving car or simply on foot. Life size commemorative sculptures in bronze were placed on pedestals along the newly developed Mall which connected the city with the new Cantonment. These sculptures adorned the designed open spaces in front of key institutional buildings and the personalities represented either belonged to or had some link with that institution. Amongst these sculptures there was one of John Lawrence in front of the Chief’s Court; statues of Lala Lajpat Rai and Sir Ganga Ram were present around the Lahore Museum area and of Alfred Cooper Woolner outside the Punjab University Old Campus. 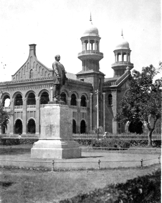 The fate of most of these sculptures reveals a very interesting tension between art, place and discourse as out of all these British Period sculptures of Lahore, only one is standing today. This sculpture is of Alfred Woolner who was a prominent British educationist and Professor of Sanskrit at the Punjab University. The rest of the sculptures are all gone. The question is that what exactly led to and resulted in the removal of these sculptures? Against popular belief, it was not the iconoclasm of the post-independence society; it was rather the political controversies that surrounded the personalities whose sculptures were placed in Lahore’s public places.

Let us analyse one by one to understand the circumstances and the politics that surrounded them. The over life size British Period statue that was removed soon after partition from the front lawn of the Lahore High Court was that of Lord John Lawrence who was a prominent British Imperial statesman. Even before partition there were attempts to have this sculpture removed because the residents of Lahore found it to be offensive as the sculptor had inscribed a saying of John Lawrence on the pedestal which read “By which will ye be governed, by pen or by sword?” and the figure of John Lawrence was shown holding a pen in one hand and a sword in the other. It was finally removed in 1948 and shipped to Ireland in exchange for a model of the Taj Mahal made in white marble which is now on display in the Lahore Museum. The sculpture of John Lawrence now stands in the front lawn of the College of Foyle in Derry which is a city in Northern Ireland where he belonged and received his education.

The statue of Lala Lajpat Rai who was a political leader of Kashmiri descent and played a leading role in the resistance movement against Imperial rule was removed from the Mall in 1948 and was taken to Shimla where it was re-erected the same year. Lala Lajpat Rai was killed in Lahore during a police baton charge while leading a peaceful procession against the Simon Commission in 1928.

The statue of Queen Victoria that was placed in the Charing Cross in 1901 as part of the jubilee celebrations was removed to the Lahore Museum in 1951 because it was considered a symbol of British Imperialism. The statue of King Edward VII was also removed from Neela Gumbad area for possibly the same reasons where it was erected in 1914 when the square was formally designed and named after him. It is now on display in the Lahore Fort Museum. The statue of Sir Ganga Ram who was a prominent engineer and philanthropist was also removed and taken to India by his grandson. There is a mention of this statue in a satirical short story by Saadat Hassan Manto expressing hypocrisy of the Indian society that failed to show respect for a local hero.

The question however still remains, why and how has Woolner’s statue survived? Is it because he was an educationist and had nothing to do with politics? Or is it plain simple luck that it has so far been overlooked? The statue today stands outside the Punjab University old campus along the Mall because a wall has been built in front of the fore lawn leaving the statue outside the campus. This has also altered the sense of place because the statue no longer forms the optical centre of the urban space.

Zamzama, photo by the author

A new tradition of displaying military and warfare objects at public places also started during the British Raj. This was something that continued after partition and these displays were revered as objet d’art for obvious reasons. The first object to come on public display was the Zamzama Gun that features in Rudyard Kipling’s “Kim”. This gun was initially displayed outside the Delhi Gate but later moved to its present location 0utside the then newly constructed Lahore Museum. Following this, there was all sorts of military memorabilia that was displayed in Lahore, some historically significant and some not so significant. This included tanks, guns, submarines, F-86 Sabres and replicas of missiles. These displays now provide amusement to children if nothing else.

There has been a loss of the spirit of place in the past two decades because of a prevailing paranoia. High walls, razor wires and pointed fences have divided and diminished public space, both physically and visually. It may sound unscholarly an argument but this is the single most responsible factor in the seizure of public place and discourse. For a long time after partition Lahore did not see modern sculpture or any other form of contemporary artistic expression as an integral part of its public places; there were only fountains and inert memorials placed on isolated islands that were actually traffic calming features. It is only very recently that we have started to see the presence of art and the artist as part of the public place and its discourse.

Take for example the pigeon houses in the Istanbul Chowk; it took some time for the urban shock to slowly turn into a familiar object in space, adding to its sense of place and identity. However, it is still very much a visual experience rather than an interactive and tactile one, unlike the changing nature of art in public places in other parts of the world. This unchanged nature of public art in Lahore brings forth an interesting aspect, which regardless of the evolution in form and ideas, the very nature of art has remained sacred and removed.